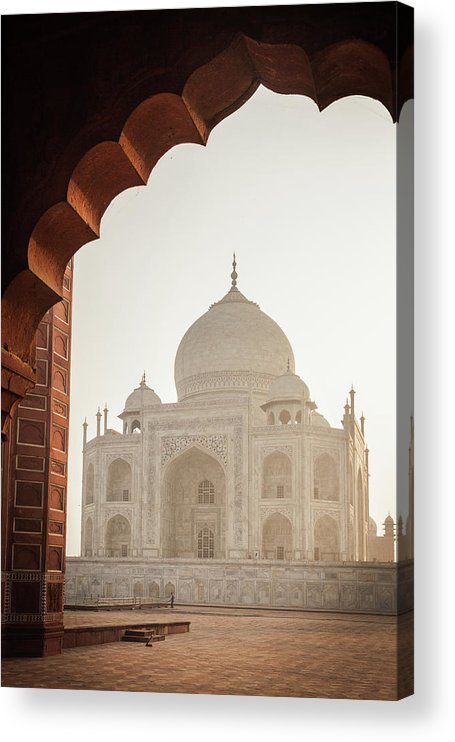 Taj Mahal Mosque View II acrylic print by Erika Gentry.   Bring your artwork to life with the stylish lines and added depth of an acrylic print. Your image gets printed directly onto the back of a 1/4" thick sheet of clear acrylic. The high gloss of the acrylic sheet complements the rich colors of any image to produce stunning results. Two different mounting options are available, see below.

Enhancing the already present splendor of the Taj Mahal is a building that stands on the western side of it, a Mosque made up of red sandstone. It... more

Enhancing the already present splendor of the Taj Mahal is a building that stands on the western side of it, a Mosque made up of red sandstone. It serves two purposes, first, it was obligatory according to the Muslim law for each mausoleum to have a place of worship nearby; second, the mosque and a mirror image of the mosque, a guest house that stands on the opposite side of it, together provide a perfect symmetrical balance to the architecture of whole of Taj Mahal. Used for prayer purpose, the mosque faces the direction of the holy city of Mecca and is believed to have been built by Isa Mohammad. The exterior possesses one dominant portal known as an Iwan and on either side of it are two smaller arches. Three marble coated domes and four little domed kiosks with marble veneer make up for the splendid visuals of the mosque, a design that is similar to others built by Shah Jahan, particularly to his Masjid-Jahan Numa, or Jama Masjid, Delhi.

Erika Gentry is an internationally exhibited, interdisciplinary artist working within photography, video and installation. Her projects explore issues of identity as expressed through the use of technology and place. A self proclaimed Francophile, she exhibits and travels internationally and in 2014 was an artist in residence in France funded in part by the Tenot Foundation and Center for Cultural Innovation. She also designs photography workshops for intermediate photographers in France and San Francisco: www.photographyinfrance.com and www.erikagentry.com.